If you served a traditional Easter meal at home, you likely served ham with all the fixings.
Still have some leftover ham from Easter and want something to do with it?
How about a creamy Smokey Cauliflower Corn and Ham Chowder?
So easy and delicious and healthy because there isn't any cream.

And, BTW, if you have any chowder left over, it tastes even better the next day. 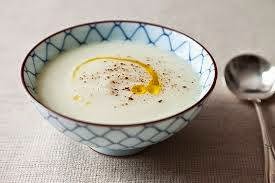 2 bags of frozen cauliflower
2 tablespoons of Smoked Olive Oil (found at Joe and Son's)
1 medium onion chopped into very small pieces
2 cloves of garlic, finely chopped
4 cups chicken broth ( You can use fat free, if you like)
1 can of  whole kernel corn (15 oz), drained  or thawed, frozen corn
3/4 cup of chopped cooked ham
salt and pepper to taste

Saute the onion and garlic on medium heat in the Smoked Olive Oil till tender.

Using an emersion blender, puree the soup until smooth. Add the corn and ham. Season with salt and pepper to taste and stir over low/medium heat until all of the ingredients are hot.

Serve and drizzle with a little more Smoked Olive Oil.
Posted by Olivia at 1:47 PM No comments:


Gidi is the Italian name for Swiss Chard.  Swiss Chard used to be easy to find, but nowadays you have to be lucky and know someone who is growing it in their vegetable garden.  I'm not that lucky, so I improvise using fresh spinach.  Spinach is a good substitute and the result is a tasty variation of the original recipe.

I had assumed most people were familiar with this recipe, but I have just learned that this isn't so.  This takes only about 20 minutes prep time and maybe 25 minutes of cooking time.  So, in less than an hour you have a great appetizer, buffet table addition or a delicious snack.  Trust me, even people who refuse to eat spinach become quick converts once they taste this.

This version of the recipe only uses grated Italian cheese in the filling, but feel free to top the spinach filling with about a cup of shredded Mozzarella cheese before adding the top layer of dough. 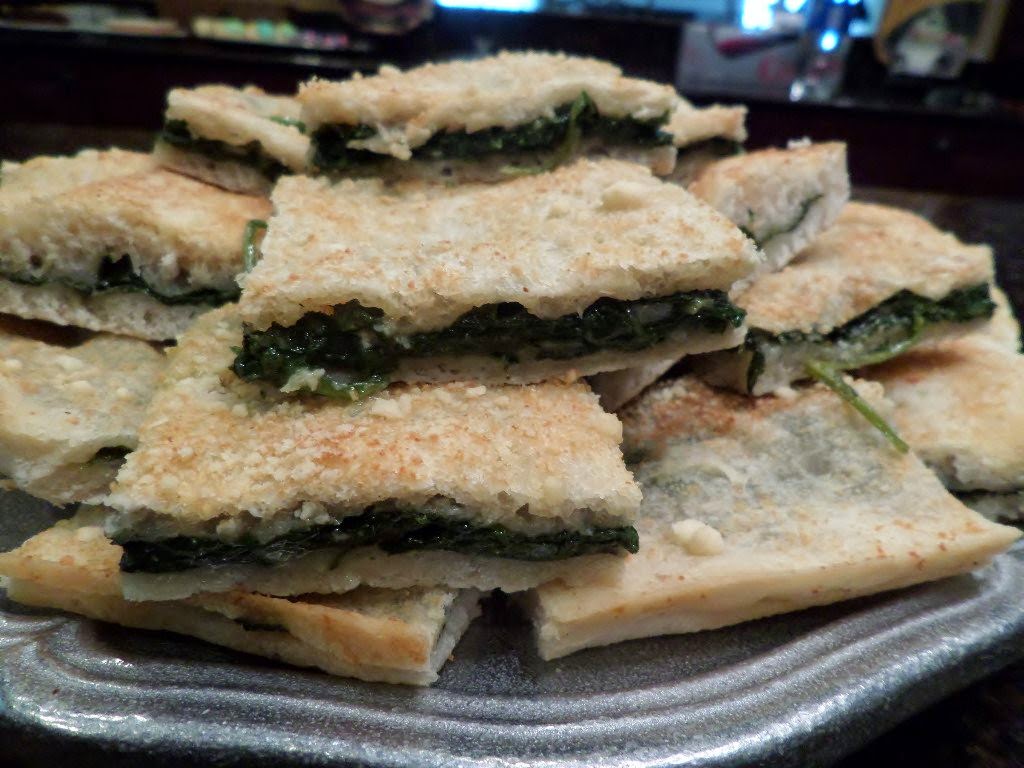 
Open 1 tube of pizza dough and spread evenly on bottom of pan.

In a bowl, combine spinach leaves, 1/4 cup Joe and Son’s EVOO, garlic, salt & pepper, grated cheese.  Toss until spinach leaves are coated. Place the spinach mixture on the base dough...taking care to leave about 1/8" of dough plain around the edges for sealing purposes.


Open the 2nd pizza dough tube and place it on the spinach mixture.  Press and seal the edges around the baking sheet.


Using a pastry brush, moisten the upper crust with the additional olive oil.  You’ll want to use enough oil to really moisten the crust, but not so much that it pools on the crust.


Sprinkle garlic powder over the crust and top with a sprinkling of grated cheese.


Bake at 300 degrees for about 25 minutes or until golden brown.


Cool for 30 minutes before cutting into 2" squares.  Serve warm or at room temperature.
Posted by Olivia at 7:19 AM 2 comments:

When is a salad not a salad?  When it becomes a French Sandwich.

This is not my recipe; I give credit to Waverly, who put together this combination of ingredients that come together to make an incredibly delicious sandwich.

Though this is not my recipe, I have made this sandwich and it is just too good not to share with you.

A decidedly Nicoise tuna salad is pressed between two garlic and oil slicked halves of a baguette.  It is then wrapped and left in the fridge overnight, which allows all of the juices to soak into the roll. 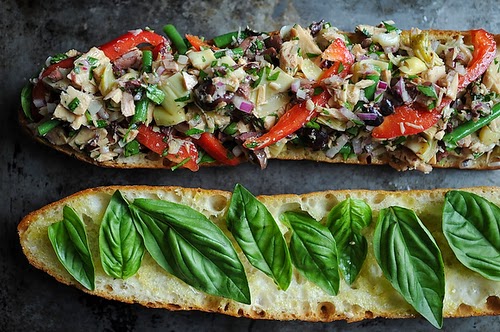 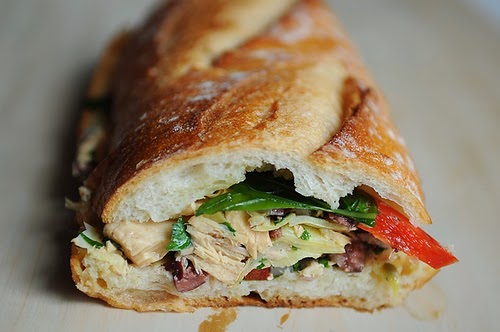 Posted by Olivia at 5:43 PM No comments:

I was  thinking ahead to Easter and what to fix as a side vegetable dish.  I was looking for a recipe that, of course, was quick and easy to fix and that would appeal to the kids in the family as well as the adults.

I had prepared something like this in the past, but I felt like playing around with it and added a little of this and a little of that to the original recipe.  I must say the end result is a rich, filling, tasty casserole that would be perfect for a holiday meal.

Don't be dissuaded by what appears to be a lengthy list of ingredients and processes.  If you look closely, you'll see very little slicing and dicing is involved and this is very easy to put together.  This will  serve from 10 to 14 people.

1 cup half and half cream

Salt and Pepper to taste
Preheat oven to 350 degrees.

In a large Dutch Oven, or saute pan, warm the Joe and Son’s Olive Oil to medium temperature and saute the celery, bell peppers, yellow squash and onions until the onions and squash are soft and slightly transparent. Add the garlic and cook for another minute, or so.

Stir in the flour and gradually add the milk and cream, followed by the softened cream cheese. Cook over low heat for a few minutes until the sauce begins to thicken. Add the grated cheeses and stir until they are melted.

Add the spinach and artichokes and stir to mix well. Add salt and pepper to taste.

Transfer the creamed mixture into a 9 x 13 pan that has been prepared with cooking spray. Sprinkle with the Parmesan Cheese.

Bake, uncovered, for 20-30 minutes until casserole is hot and bubbly.