Chicken dishes can just be so ordinary, can't they? But the truth is that with a few savory ingredients we can transform them into spectacular presentations.

Case in point is this recipe. I happen to love the flavor that a Spanish sausage called "chorizo" adds to recipes with Mediterranean flavors, so I made sure to include it when developing this recipe.  By braising the pieces of chicken in a light tomato based sauce, all of the flavors blend together and result in a delicious meal worthy of applause!

Though it seems that this is a difficult and time-consuming recipe, trust me, it's not.  Once the ingredients are cut up, it's a matter of just putting them in a pot.

You could serve this dish over rice, but I especially like the taste and appearance of this dish when served over polenta.  For an extra pop of taste, add shaved Manchego cheese  and stir until it melts evenly in the hot polenta. 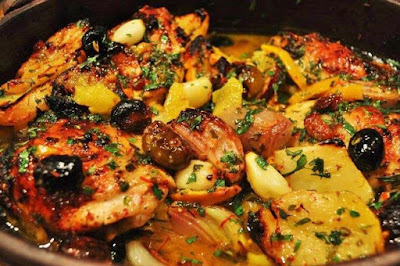 
Heat Olive Oil in a large Dutch Oven and saute the seasoned chicken pieces, half at a time, for about 5 minutes until browned. Set aside to keep warm.

In the same pan, saute the onions, garlic, bell pepper, ham and chorizo until the vegetables are soft, not mushy. Remove from the pan and place them over the chicken pieces.

Add the Balsamic Vinegar to the pan, scraping to loosen the browned bits. (This is known as deglazing the pan.) Cook over low heat for about 5-6 minutes until the vinegar starts to reduce and becomes a bit thicker in consistency.

Add the chicken, ham and chorizo mixture to the broth. Cook and stir over medium heat until all ingredients are heated through.

Serve over rice or polenta.

Posted by Olivia at 6:19 PM No comments: