I felt a little adventuresome yesterday and wanted to  try something new when making a red sauce. Now, according to my family, I do make the best ever spaghetti sauce so there's no need to change it up. However, in spite of their praises, I wanted something a little different in appearance, texture and taste.

I grew up in an Italian household that taught me that a true spaghetti sauce with meatballs or sausage NEVER had bell pepper in the sofrito...only onion and garlic.  The only time bell pepper was added to a tomato sauce was when it was being prepared with seafood.

I decided to throw out that dictate and see where it led.

Well, you judge for yourselves.  Just know that  I was told this sauce, though straying from our traditional family recipe, was outstanding.  It was chunky and rich with flavor and I'll be making it again. 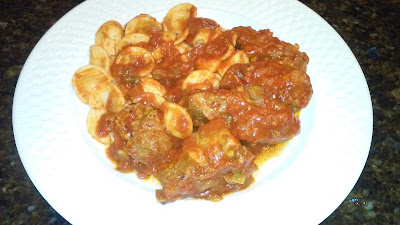 Salt and pepper the short ribs and broil them until they have a “cooked” appearance. They will still need further cooking in the sauce. Set them aside in another pan while you prepare the sauce.  Before placing them in the sauce, I usually cut them into 3" pieces; some will have bones; some won't.

Pour the olive oil into a large cooking pot and warm to a medium temperature. Saute the next 4 ingredients until the onions become cloudy and the celery and bell pepper lose their “crisp”.

Add the next 7 ingredients and cook, covered, over low heat for about 30 minutes. Add salt and pepper to taste.

Then add the short rib pieces and continue to cook until the meat is cooked and tender. This should take about 90 minutes. Be sure to stir often so the sauce doesn’t stick to the bottom of the pan.

The sauce will start to reduce and become chunky during this time. If you think it’s too thick for your liking, add a little water, but the sauce should be thicker than your usual pasta sauce.

Now add the Balsamic vinegar; stir and cook for another 15 minutes. Remove the bay leaves before serving.

Serve hot over Shell or Orecchiette pasta or Polenta.