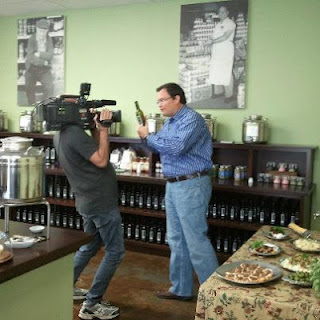 We were really excited to have Charlie Belcher from our local channel 13 come to the store on Monday morning as he taped another segment of Charlie's World from Joe and Son's Olive Press.  As a result, we have had a lot of new customers come into the store to try some of the oils and vinegars he and Andrea talked about.

They were also very interested in tasting some of the goodies we had out for Charlie. You can see some of them in the above picture.  They tasted, got the recipes and bought the oils and vinegars they needed to make them.

For some reason, we seem to get the friendliest, nicest customers in the store.  By the time you folks leave, it's like we've known each other for years.  Just let me thank all of you for taking the time to come in, visit with Michael, Andrea (or me) and giving our oils and vinegars a try.

We just introduced a new and easy recipe that has become a favorite of our customers.  It's a recipe for Roasted Cinnamon Pear Bruschetta. Trust me; this one's a keeper!!! 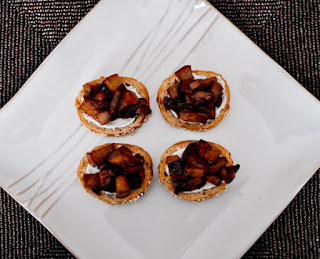 Preheat oven to 400. Lay baguette rounds on a baking sheet and bake for 5-7 minutes, or until golden brown and toasted. Set aside.

Heat a skillet over medium-low heat and add Joe and Son's Butter Olive Oil. Add pears, then sprinkle with salt, cinnamon and nutmeg. Allow to caramelize slowly – for about 10-15 minutes. Mash the pears slightly so they form a sort of puree.

In a bowl, combine mascarpone and honey. Spread on baguette slices.
Once pears are caramelized, add balsamic vinegar and cook for 1-2 more minutes. Add spoonfuls of pear mixture on top of mascarpone on baguette. These can be served warm or cold.

Now, don't think this pear mixture is only for this recipe.  Let me tell you that it is delicious over vanilla ice cream.  Also, when added to brie in pastry, it's another fantastic appetizer.

Enjoy!  And let us know how you liked it.