I never thought my family would easily adjust to going meatless several times a week, but since the pasta dishes, soups, and veggie meals I have been preparing don't leave them hungry, it has been a relatively easy transition.  Plates once filled with large portions of meat and starches  have been replaced with lighter meals that have fewer calories, fewer fats and fewer carbs.  And that's a good thing. 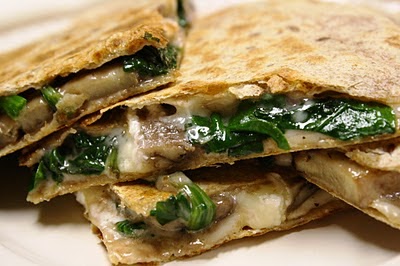 salt and pepper
Heat the Chili Olive Oil in a large skillet. Raise heat to medium-high. Saute the mushrooms, bell pepper and garlic until tender and liquids have evaporated. Add the thawed corn and heat until the corn is hot. Add the spinach, stir and toss until the spinach is slightly wilted. Remove from heat.
Season with salt and pepper to taste Place the tortillas flat on a baking sheet. Divide 2 ounces of the Monterey Jack cheese among the tortillas and sprinkle on ONLY half of each tortilla.

On each tortilla, top the same half with 1/4 of the vegetable mixture, add a slice of avocado and sprinkle the remaining Monterey cheese over the vegetable topping. Fold over to cover the filling.
Broil (about 2 minutes each side) until the tortillas are crisp and the cheese has melted. Serve hot.

*I fixed this using the Green Chili Olive Oil; if you feel this would be too hot for your taste feel free to use Joe and Son's Chipotle Olive Oil instead for " strong warmth" rather than "heat".