If you're not familiar with Garbanzo beans, you may know them as Chick Peas.

This is a recipe I've changed from the way my Mother used to make it to a much quicker (and just as good) version that can be made from start to finish in under an hour.
I know....the purists are going to say that using dried beans and soaking them overnight is the right way to make this recipe. But, let me tell you that the canned beans are just as good, if not better, than the dried beans.  I promise you that no one will know.  If you don't tell; I won't.

Now, I like this soup to be thick, and not brothy. So, after the beans have been cooking for about 15-20 minutes, I take out about a cup of the beans and mash them so they become pureed. Then I add them to the pot and continue cooking.  If you prefer a thinner broth, then don't do this.

This recipe serves about 8 people and tastes even better the next day if you have leftovers. 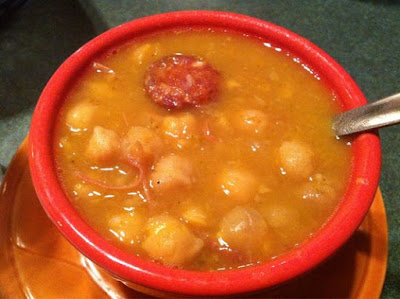 Salt and pepper to taste

In a large soup pot, heat the EVOO and saute the first 3 ingredients over medium heat until the onions are transparent. Add the chorizos and ham pieces and continue to stir for about another 10 minutes.

Add the crushed tomatoes, Garbanzo beans and their liquid, the beef broth and the Vigo flavoring. Cook over low/medium heat for about 30 minutes and then add the potato pieces.

Continue to cook until the potatoes are fork tender, but are still holding their shape.
Salt and pepper to taste

Serve hot with good crusty bread to sop up the broth.