Mushrooms and Shrimp in a Cream Sauce

Have you ever been in a hurry to get dinner together and didn't have a meal planned?  This happened to me this evening, but because I had a few staples handy and some frozen shrimp, I was able to produce a dish that actually was very good.

It was good enough that the Hubby wanted to know if we had any leftovers....and this  was coming from someone who will only eat leftovers if there is absolutely nothing else to eat.

Anyway, some onions, garlic, rosemary, mushroom/sage olive oil, fresh mushrooms, shrimp, salt, red pepper flakes, flour and milk and some pasta was all it took and it was ready in about 15-20 minutes. 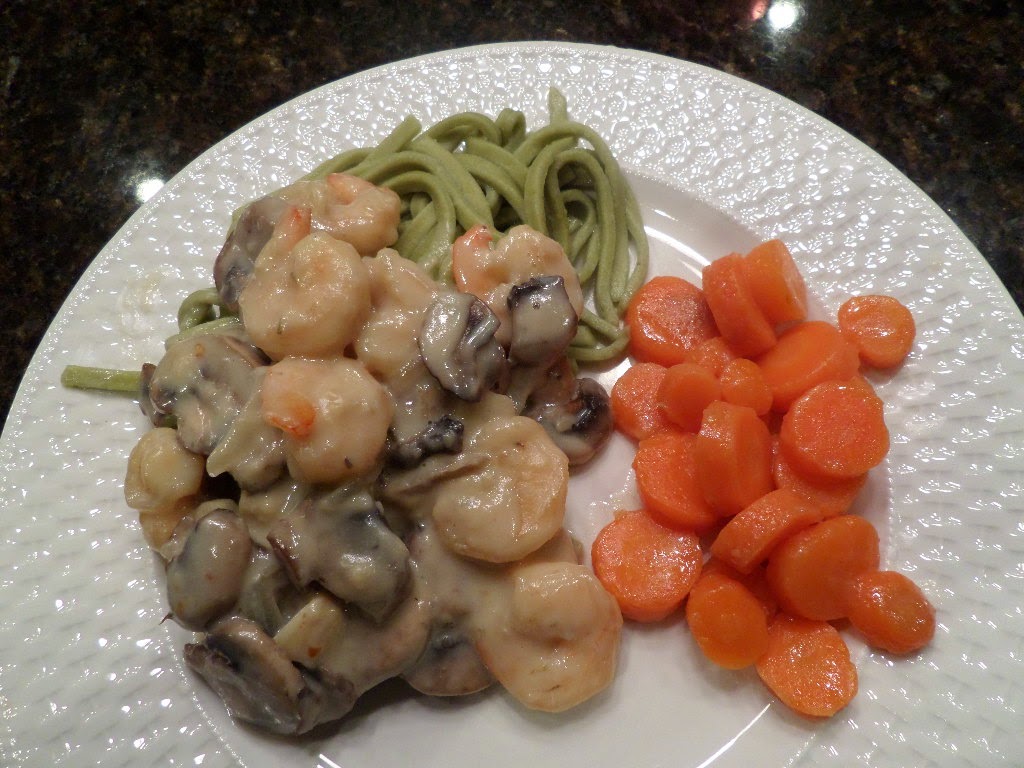 Mushrooms and Shrimp over Pasta
1/4 cup Joe and Son's Mushroom/Sage Olive Oil
1 medium onion, thinly sliced
3 garlic cloves, minced
12-16 ounces of fresh, sliced mushrooms...cleaned and wiped
18-20 large shrimp, fresh or frozen....thawed, deveined, with tails removed
1/2 teaspoon crushed dried rosemary
1/4 teaspoon red pepper flakes
1 tablespoon all-purpose flour
3/4 -1 cup milk or half and half *
salt to taste
1/2 pound pasta or liguini....for this dish I prefer Spinach pasta or Black linquini for color contast
Pour the Mushroom/Sage olive oil into a saute pan and warm the oil to a medium heat; add the onion and garlic and cook over medium heat until the onion becomes transparent.
Add the mushrroms to the pan and cook, stirring often, until the mushrooms have released their liquid and it has evaporated.
Add the shrimp and stir and cook until they are pink.
Sprinkle the shrimp with the rosemary.
Evenly sprinkle the mixture with the flour and slowly add 3/4 cup of the milk or cream.  Stir until the mixture starts to thicken.  If the sauce is too thick, add a little more milk to thin it out.
Add salt to taste.
Serve over the pasta of your choice.